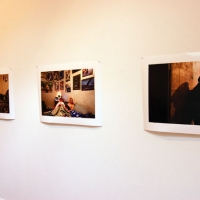 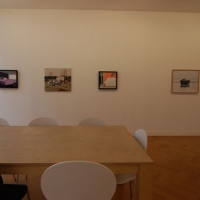 In this exhibition three young female artists take us to places where many things are happening. The Belgian photographer Bieke Depoorter (1986) travels around the world and invites herself into the homes of the people she meets. With an eye for detail and a social awareness, she portrays those people, mostly families, in their natural habitat, in a way that makes their hopes, wishes and dreams almost tangible. The images she creates, are recognisable and homely at first but have a raw and alienating undertone. Her series on Russia has won various prizes, including the Magnum expression award. For her latest work, which is still in progress, Bieke has travelled to the United States, a selection of this series is included in the exhibition.

Esther Janssen (1976) creates paintings in an unusual manner. With fake skai leather she ‘builds’ a work that confronts us with reality, or reality perceived by the artist, or maybe not reality at all but an image which is just as fake as the material it is made of. The sewn paintings are stuffed with filling and seem soft to the touch, inviting and sensual. Yet the technical perfection of how they are made, the detailing and the almost stand-offish shine of the material creates a distance, a sense of sharpness and increased awareness. This comes to a culmination in her latest work on destroyed places.

The landscapes in the photographs of Luisa Zanzani (1980) are layered by history and she exposes them with her camera in a way that is both sobering and poetical. With a sense of longing she looks for images that show the landscape with the alterations in it’s identity caused by time and cultural changes. For her startling series Adria, Luisa travelled to her homeland on the Adriatic coast in Northern Italy, once an epicentre of mass tourism, capturing the melancholy atmosphere of the deserted beaches in the misty winter season and making us question what it is that we are actually looking at on these ‘holiday postcards’.