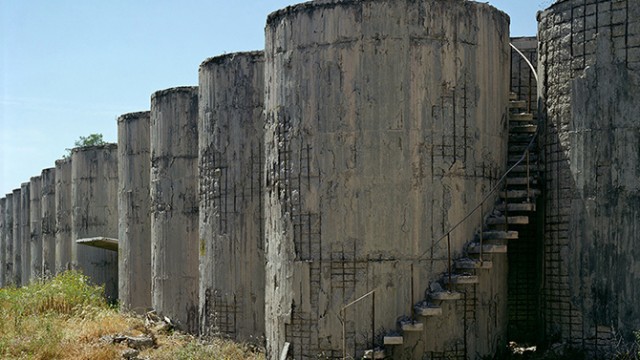 In the photography works of Denis Guzzo (b.1977 Vicenza, It) past and present play an important and significant role. Being an Italian Guzzo feels the past of the country in his veins. The history of Italy going back to the Roman (Etruscan) period or closer by the Renaissance or Baroque period, forms part of the dna of Italians. They feel linked with this past, the same as we Dutch have a natural feeling for the achievements in the Dutch 17th century on subjects like trade, art and society.

So it does not feel strange for Guzzo to investigate traces of the past that are still present in today’s life. His place, where he could find this best mixture of past and present, happened to be Eleusis near Athens in Greece. 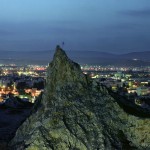 Eleusis, in the past a place of mystery plays in favor of goddess Demeter who lost her daughter Persephone, kidnapped by Hades, God of the underworld. The mystery tells about this descent (katabasis) into the underworld, the search and return of Persephone into the arms of Demeter wife of Dyonisios.

A sense of this past can be felt in a few rocks who survived as witnesses of these mysteries from the past and to be seen in Guzzo’s work.  He is a kind of contemporary archeologist who has found remnants of the past in an environment of modern industries and expanding cities.  Almost all traces were destroyed by contemporary society of industrial capital and egoistic mayors of Eleusis (Elefsina) who wanted to have the rocks for new housing to make the city more important then ever before. Wasting mythology as Denis Guzzo called this series of photographs that give a constructive criticism on these developments  of expending  environment  using this magical site of the past.

The balance between the fading sites in a polluted world where we gain more and more efforts to get the world greener, and the visualization of this process is not there.  We talk more, we promise more, we collect more money, but never really know what for. Images lack.

Guzzo’s photographs are these images. They show the subtle line between the greedy world and its fragile nature, between the bulldozers of today and the rocks of the past.  He discovers with his camera the archeological meaning of Eleusis and at the same time the striking similarities between old Greek temples and details like steps, walls, gates and todays architecture. The old industrial plant nearby this site of Eleusian Mysteries is now in ruins and resembles the old temples. Not  a place for spiritual meaning, but capital gain. But the threat is still there, for Titan the brick company wants to have it all.

Positions, the choice of the photographer for subjects like Eleusis, and also Almere (Flevopolder) an earlier series called Freedomland on the traces of this young area in Dutch polders. Here it is man-made nature instead of natural rocks and valleys. Man-made structures in new land taken from the sea, showing optimism for future developments. These sites, when time moves on, will eventually become past and forgotten. Luckily Guzzo has made a visual survey of today’s situation that will hold for many years.