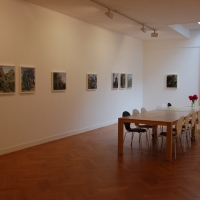 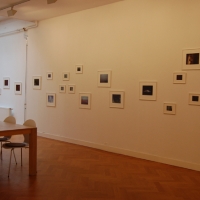 Benoit Vollmer’s latest series ‘Dépositions’ grew out of a residency in Céret, situated in the French Pyrenees, a town once popular among epochal artists like Picasso, Gris, Matisse, Braque or Soutin, and which now seeks to redefine its relationship with the landscape. Escaping the inevitable sense of history tied up with the place, Vollmer steered away from the beaten tracks of a landscape photography that is either realistically close to nature or deliberately removed from reality, echoing the abstractions of illustrous predecessors. After surveying the region around Céret by hiking deep into the woodlands and seeking the limits of the cultivated terrain, he found ‘that even though there are totally different landscapes in this region, there is one common point, which is the wind’. Thus the wind was what needed trapping.

Terrains can find natural borders in rivers, seas or mountain passes, but can there be such a thing as topography of the wind? The wind, as invisible and abstract as state power, can only be captured where it meets resistance, in this case, the various species of trees populating the area. Through the swaying, moving, twisting and lashing of branches and foliage, the wind leaves an immaterial deposit, a sediment, on the film’s surface. Vollmer set out to chart and identify which were the proper winds, the proper trees, the proper scale and distance prerequisite for evoking not just the wind itself as a defining moment, but with it the physical, bodily sensation of being outside on a windy day. The result is a work that is, quite literally and before anything else, incredibly sensual.

Facing the viewer are still images of the wind, portraits of a landscape that upon observant inspection betray their roots in the Pyrenees. Even local residents might not be able to pinpoint the exact location of each photograph, but they would be able to immediately, almost instinctively, identify the particular way the light falls on a sunny day in the late winter season, when alpine landwinds bring cold, clear, cyan-colored skies over the early mimosa blossoms. They might recognize the specific vegetation of vinyards fallen in disuse, the color of the soil or the clustering cactus plants at the foot of a patch of trees. Few will see the wind itself, for it remains forever invisible, but the body can sense it, expressing its recognition in an involuntary shiver, in a short gesture of closing one’s coat, or the imperceptible widening of a nostril ready to sniff the air.