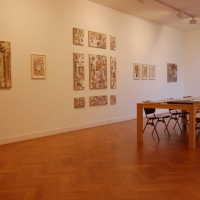 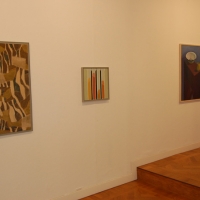 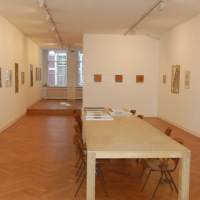 The exhibition ‘Samenhang’ shows paintings and drawings of two painters who have great respect for each other. Not in the first place because one was student of the other, but also due to the character of their work which contains the same mentality and vision of building up a canvas with a world that exists in its own but always has the real life as background.

The master, Johan de Haas (1924) and the student, Aart Houtman (1956) found each other at the academy in Arnhem where Johan de Haas was a teacher in painting. Since their first encounter on this academy they became friends and this friendship still lasts.
The title of the exhibition ‘Samenhang’ refers to the development of their work, meaning that works from a far past (Johan de Haas) are combined with works from shorter periods in the past and works from the present time. Both artists give proof of a consistency in their development which can be seen in this show. The early portrait paintings on carton board by Johan de Haas were made in his last years on the academy in The Hague (1954-1956) and already here one feels the direction de Haas was taking: the head of a man constructed as if it is an assemblage of abstractions that defines the persons head. After the academy de Haas moves this abstraction further to a total of non figurative forms in balance, either in color or form, either in structure or saturation of the paint. Non figurative, but taken from real life, just as his portraits showed real people. That de Haas found his ‘style’ rather quickly after the academy has to do with his entry on the academy being in his twenties, much older than his fellow students, and having more experience in life thus easier to experiment on the academy for finding his personal style.

Another indirect influence for the imagery he developed, lies in the overall climate in The Netherlands during the early fifties where experiments were found with the Cobra painters in Amsterdam and the Abstract painters in The Hague (such as Pieter Ouborg, Jaap Nanninga, Willem Hussem, and others). Also the influence of his academy teacher, Rein Draijer, must be mentioned. Draijer was a painter who, although his paintings show figurative real life, experimented with forms, structure of the brush, depth in planes and gave his students a thorough lesson in painting techniques. De Haas adapted these lessons with enthusiasm as can be seen in his paintings of the late fifties in which he used different paint, such as oil, tempera, casein tempera at the same time. So the surrounding atmosphere in The Hague was more directed to abstract painting (as the French Ecole de Paris of the late forties with painters as Mathieu, Soulages) with a certain control over form and paint, much different from the emotional a socially engaged paintings of Cobra artists like Appel, Jorn and Constant.

Another important role played the meetings in a cafe in The Hague and the Painters club of Pulchri. Here everyone who was important in the art scene of The Hague came together for exhibitions in Pulchri and a drink afterwards or before in cafe De Posthoorn, famous for his bitter balls, and also a place where artist could show their work in the space next door: ‘Galerie de Posthoorn (1956-1962)’. In the corner of the Voorhout lived the painter Harry Verburg who later became the director of the Arnhem academy. In these days one could speak of the ‘triangle Art’, for the Pulchri studio and the Posthoorn were also situated at the Voorhout. Painters met, drank and talked, an inspiring period for a young painter such as De Haas.
When becoming teacher in the Arnhem Academy (1963), Johan de Haas carried this past with him and became for his students a very important teacher just as important as Rein Draijer was for him.

Solid grounds for a young man like Aart Houtman who started in Arhem in 1975 and enjoyed with great enthusiasm the lessons of Johan de Haas. He moved, after finishing the academy in 1980, to the city of Delft and remained there to continue his career as a painter ‘pur sang’. With alternate success in his development, he continued to investigate the qualities of paint making an image out of itself as it seems. Digging in paint or the paint flowing, are his favorable actions. In his last series of paintings, which constantly refer to each other, also by adapting each other’s content in a different way, he combines the imagery of his early post academic work with present ideas, thus mixing materials as paper and texts of this early (collage) work into the new paintings.